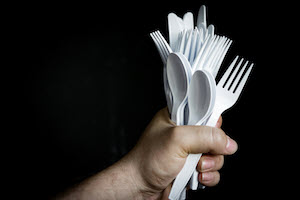 The European Commission recently presented an ambitious new directive to tackle marine litter by introducing a number of measures, including reduction and restriction of selected single-use plastic products, such as disposable balloon sticks, straws, cutlery, plates, cups and food containers. That has the European plastics industry in an uproar.

he European Plastics Converters (EuPC) sent out a press release saying that it “regrets that the European Commission has put forward the proposal for a directive” targeting certain plastic products to reduce their impact on the environment. The proposed directive is taking aim at single-use plastics and fishing gear. “The proposal represents a symbolic attack on a category of poorly defined products, which leads to confusion of end users and causes fragmentation of the single market,” said the EuPC. “It contains a definition of single-use products that is misleading and does not reflect industrial classification.”

The use of a directive is intended to prevent a “fragmented legal landscape” throughout the EU. However, the EuPC’s statement noted that, in the case of the ban on plastic carrier bags, just the opposite has happened, with some member states implementing “Bags Directive” rules at their own discretion, “leading to a proliferation of rules and labeling requirements.”