Medical Device Molding is a significant portion of the total medical device market. With a population over 300 million, the USA is the third largest country in the world, behind China and India. The largest state is California, with a population of 37 million. At an estimated US$105.8 billion in 2011, the US medical device market is the world’s largest. Per capita expenditure, at US$339, is the third highest in the world. (1)

The medical devices market for plastics totals 1,370.0 million pounds, corresponding to revenues in excess of $1 billion in 2012 in North America alone, according to a new 2012 study by Frost & Sullivan. Additionally, the forecast that by 2018, revenues will reach $1.45 billion, fuelled by a compound annual growth rate of 5.2 percent. (2)

Writes Bart Thedinger, V.P. from Mastio & Company in 2010 “Certainly, the medical molding business is less susceptible to economic swings than most other industries. In fact, many of the molders we interviewed for this study saw an uptick in their business last year. A few market leaders have recently added capacity to accommodate the needs of an aging population requiring additional medical care and treatment.”

“On the other hand, growth rates are being suppressed by vigorous pricing pressure from group purchasing plans and HMOs, along with mergers among the medical-device OEMs. Medical molders are also feeling pressure from hospitals to lengthen the life of their products. Some hospitals spend as much as $1 million a year on incineration, so the heat is on processors to engineer and produce parts that can withstand the myriad of sterilization procedures used throughout the world.”

“High-growth product areas in this field include drug-delivery systems for respiratory care and diabetes, such as dry-powder inhalers, prefilled syringes, and improved blood-glucose test strips. Although hospitals will continue to be the strongest area for injection molded disposable medical supplies, molders will also see strong opportunities in over-the-counter products, as consumers opt for self treatment to lessen out-of-pocket medical costs.” (3)

Brown Gibbons Lang & Company (BGL) reports the U.S. plastics industry is seeing a broad-based recovery, with signs of improvement in a number of high-volume end markets, including automotive, packaging, medical and consumer electronics. Recent statistics reported by the Society of the Plastics Industry show that plastics manufacturing, after declining 17 percent during the recession, recovered 53 percent of that loss by January 2011 and with a sustained economic recovery is projected to reach its pre-recession peak by 2012. Other data compiled by Plastics Custom Research Services projects recovery in most major plastics markets by 2014, with medical and packaging outperforming the overall market in volume growth.

Medical molders are reporting robust growth, supported by continued stable demand in medical disposable and durable products with an aging and ailing population. Outsourcing is a continuing trend, and customers are increasingly looking to suppliers for innovation and value-added solutions, which translates into volume for molders that can provide a full-service offering. Cited as high-growth product areas are injection molded disposable medical supplies such as drug-delivery systems for respiratory care and diabetes and over-the-counter products.

Medical device outsourcing (MDO) is cited as an area for renewed M&A activity. The MDO sector is experiencing above-average annual growth rates of 8 to 12 percent, and fragmentation presents opportunities for acquisition plays. West Pharmaceutical Services Inc. is the largest player with an estimated 12 percent market share, according to Plastics News, and is one of only nine suppliers holding a share of 2 percent or more. In May 2005, West completed the $140 million cash purchase of The Tech Group, solidifying the company as a leading player in the manufacturing of high-precision injection molded plastic components and assemblies for the pharmaceutical and medical device markets and expanding its reach in Europe.(4)

The 32nd International Exhibition on Plastics and Rubber Industries 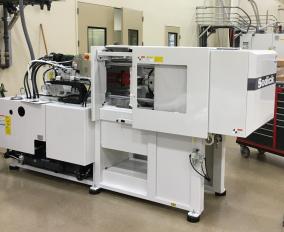 Our new injection-molding presses arrived this week. Both presses are made by Sodick, one being a...
Full post

A World Leader In

HTI Plastics is dedicated to manufacturing high quality injection molded products, providing timely deliveries and creating an atmosphere of continuous improvements where all employees strive to keep both internal and external customers satisfied.

Services for ALL industries

Capabilities for ALL needs

Our Manufacturing Engineers have knowledge and expertise in numerous product industries. Details

Our expertise and know-how is from years of creating products using a wide range of materials, design requirements and manufacturing challenges. Details