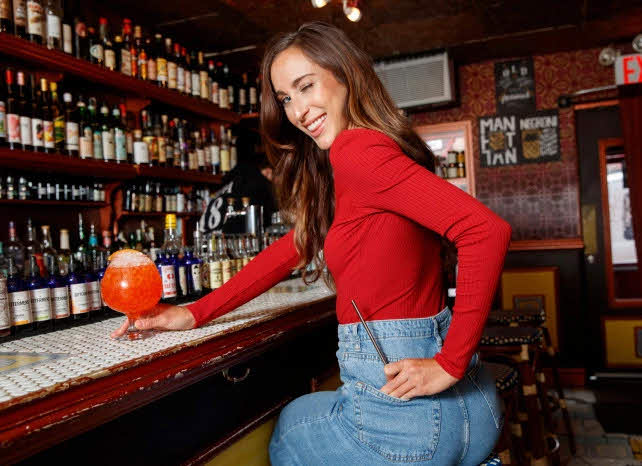 New York Post — Mugs, cups, silverware, hot sauce — you name it: If it’s in a restaurant, people will steal it, owners say.

But in NYC, patron pilfering has taken a new, environmentally conscious turn: Metal straws — those trendy, sustainable cocktail accouterments — have fast become the most covetable items for sticky-fingered diners.

“When I saw this beautiful, rose-gold straw” at a bar in Manhattan, “I was like, ‘Boom! I could keep this forever,’ ” straw thief Jaclyn Tacoronte tells The Post.

The Staten Island owner of a PR company says she figured that the tricked-out tube was up for grabs — “I didn’t know I wasn’t supposed to take it!” — so she tossed it into her purse.

“It was shiny,” she says, in further defense of her straw-snagging.

Tacoronte later leveled her karmic energy by buying a bulk package of rose-gold suckers from Amazon. But the watering hole, whose name she says she can’t recall, was likely less than thrilled at the time.

“[Restaurant theft] is one of the most divisive topics in our industry, and straws are front and center,” says Anthony LaPorta, a former manager at an upscale cocktail bar in Manhattan, who once tracked down a finance exec who had stolen a $500 glass.

He estimates that the metal straws cost about $3 apiece. Because they have to be ordered in bulk, that can add up fast. “Some places are losing 20 a week, so it becomes extremely detrimental to a business — maybe up to $5,000 a year.”

“If your glass comes back, and [the metal straw] is not in it, you’re gonna see it on the bill,” says Teague, whose third bar, Honey Bee, opens next month. “We’ll say, ‘We saw that you liked the metal straw, so we added it to the bill.’ They either say, ‘Thank you,’ because they’ve been caught, or they say, ‘Forget it,’ and give it back.”

Prior to charging for straws, Teague estimates he was losing up to 50 metal straws a month at Mother of Pearl. At Amor y Amargo, he doesn’t even offer drinks with straws on the regular menu — although he does sell four-packs of metal straws for $12 a pop, for people who really can’t bear to sip from a glass.