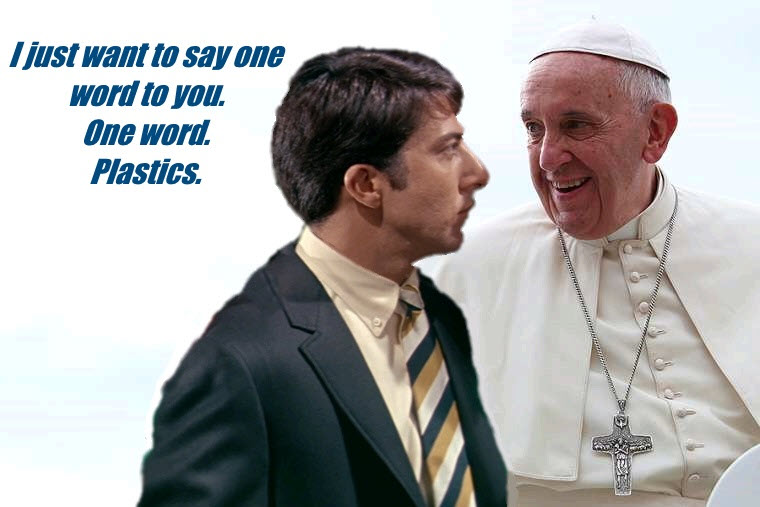 Pope Francis is talking about plastics in the oceans while his church is sinking under the weight of abuse allegations, say critics. Yet while both issues are serious, neither is what it appears — and the moment provides a good opportunity to discuss both.


The newsflash is that the Catholic Church probably never had a serious “pedophilia” problem — it had a homosexuality problem — and these trespasses peaked in the 1970s and are relatively rare today. And while the oceans are increasingly clogged with plastic, this isn’t caused by America or even the West in general, as the mainstream media would imply. These realities matters because a prerequisite for prescribing the right cure is making the correct diagnosis.


As for the church scandal, attention was refocused on it by an August Pennsylvania grand-jury report detailing the alleged sexual abuse committed by approximately 300 predator priests against upwards of 1,000 victims; it also reveals how certain bishops covered the abuse up. Horrible story, for sure.


Often de-emphasized, however, is that these alleged crimes occurred over a 70-year period and that the statute of limitations has expired on most of them. This underlines how such abuse is largely a thing of the past; the church did, in fact, take measures to make its institutions safe places for minors.


From plastic reportage to reportage about plastics brings us to Pope Francis. Recently, he “said efforts to fight plastics litter must be waged ‘as if everything depended on us,’” reported the New York Post Saturday. For this he has been criticized, and given that a wise focus currently would be purging homosexuals and abuse-enablers from the church hierarchy, the timing is bad. But the pope does have a point, one largely misunderstood — probably even by him.


For the record, I wrote back in 2007 about the Great Pacific Garbage Patch, a massive accumulation of floating debris said to be 80 percent plastics and twice the size of Texas. Since then, my town, Virtue Signaler Central, instituted a plastic-bag ban; plastic straws have been put in the crosshairs; and now leftists, killjoys all, want to ruin parties everywhere by prohibiting sales of balloons.


But let’s burst their bubble with reality: Only about one percent of plastics in the ocean are from the United States. Our nation and Europe combined account for a mere two percent.


That the economically powerful West, with its conspicuous consumption, wouldn’t be a culprit in this problem is so counter-intuitive (to most) that it perhaps wouldn’t even occur to the establishment media. But who then is to blame?


The World Economic Forum reported in June that “just 10 river systems carry 90% of the plastic that ends up in the ocean.”

“Eight of them are in Asia: the Yangtze; Indus; Yellow; Hai He; Ganges; Pearl; Amur; Mekong; and two in Africa — the Nile and the Niger,” the site continues.

So while the solution may involve us Westerners (originating new technology), this problem has nothing to do with us. As is always the case, the freest countries economically not only are the richest, but also have the cleanest environments.